The H E Wilcox Motor Car Company was bought by the Greyhound group of bus companies in America in 1927 to manufacture buses most of which were produced for Greyhound companies. The company was reorganized as the C H Will Motors Corporation, named after its general manager, Carl H Will.

The buses were known initially as W.M.C. and later as Will buses. By 1930 Greyhound and Yellow Coach (see Yellow Coach) had made a manufacturing agreement and Will bus production was stopped after a total production of about 500 buses.

The maroon and white enamel WMC radiator emblems shown above is extremely rare.

The larger, light and dark blue and red enamel variation of the WMC radiator emblem shown below is also extremely rare.


I do not know the exact dates of use of these emblems. If you have any further details, please let me know in order to update this post.

Email ThisBlogThis!Share to TwitterShare to FacebookShare to Pinterest
Labels: minnesota, WILL


E. A. Myers had established a gasoline engine manufacturing company in 1901 and also began to produce gasoline engine powered automobiles in 1903. His automobile was called the Model and by 1906 the company building the Model was named the Model Automobile Company. But, trying to sell his Model engines and also transmission systems to other automobile manufacturers, while at the same time competing with them with his Model car presented problems for Myers. In 1908, Myers renamed his automobile the Star. But, this was not enough, so, in 1909, he changed the car name again, this time to Great Western, and his automobile manufacturing company became the Great Western Automobile Company.

The initial Great Western cars in 1909 produced by the Model Automobile Company were simply Star automobiles under a new name. The four-cylinder Great Weatern was offered in three model sizes, 30 hp, 40 hp and 50 hp, but by 1911 the Great Western became a single 40 hp model offered in a range of body styles.

However, sales did not reach expectations and the company was in trouble by mid-1913 and was in receivership soon after. Some additional financing seems to have been secured, since the Great Western continued in business. But problems mounted and, although a lower-priced light six-cylinder car was produced for the 1916 model year, it was all over for the Great Western early in 1916. The last Great Western cars were assembled from parts on hand and then driven out to be sold door-to-door.


The Great Western did not carry a radiator emblem but did display a brass script with the "Great Western" script logo on the radiator core, see example shown above at the top of this post. Original "Great Western" radiator scripts are very rare.


This version of the "Great Western" script logo was used at least until 1912, see the Great Western Forty advertisement below:


The serial plate shown below displays the "Great Western" logo without the winged motive shown earlier. This form of the logo is similar to the "Great Western" radiator script shown at the top of this post. The serial plate is from an oil fired lamp made for Great Western by E & J Manufacturing Company (Edmunds & Jones Corporation) who manufactured kerosine side lamps for carriages and early motor cars before the introduction of electric powered lights. These detachable lamps were popular accessories and continued to be used into the 1920's.

Charles W Nash's life was a true "rags to riches" story. He was born in 1864, abandoned by his parents at age six and sent to a foster home, ran away at age twelve and found a farm job, learned a carpenter's trade, worked in a grocery store, was the fastest cushion stuffer at the Flint Road Cart Company owned by William C Durant and J Dallas Dort, by 1895 was managing the Durant-Dort Carriage Company, by 1910 was heading the Buick Motor Car Company and by 1912 was president of General Motors.
Charles Nash resigned from General Motors in June 1916 following a policy dispute with Billy Durant. He traveled to Kenosha and bought the Thomas B Jeffery Company, producers of the Jeffery (see Jeffery) and one of the oldest, best-known and largest automobile companies in the industry in America, and established Nash Motors Company in July 1916. The Jeffery was continued in production for a while, with Nash emblems on the vehicles appearing from mid-1917.
The first real Nash was a neatly designed and well-built six-cylinder car, introduced in April 1918 and well received by the trade press. Sales of over 10,000 cars in 1918 more than doubled to 27,000 in 1919. In 1920 Nash introduced a brand-new car called the LaFayette (see LaFayette) which was a commercial disaster and was abandoned in 1924. Big improvements were made to other Nash products. Nash sales rose to over 50,000 by 1923 and the business was very profitable. Nash attempted another new car from 1925, the Ajax (see Ajax), but this was also unsuccessful and in 1926 the Ajax Six became the Nash Light Six. In 1926 all Nash cars became six-cylinder models. In 1928 sales exceeded 138,000 units.
The Great Depression did not hit Nash as badly as other automobile companies, because Nash had managed his business and finances well. Even so, Nash sales did fall after 1929. The Nash Twin-Ignition Eight was introduced in 1930 and Nash made a profit in 1931 but recorded losses in 1932 and 1934. The Lafayette name was revived as a low-priced car in 1934 (see Nash Lafayette). In 1936 Nash bought the Seaman Body Corporation and Kelvinator Corporation to form Nash-Kelvinator Corporation. In 1937 Nash sold nearly 86,000 cars and made a profit but there was a loss in the recession year of 1938.
By 1941 the Ambassador 600 had replaced the Nash Lafayette and sales topped 80,000. Nash built aircraft engines and other products for the military during World War II. Charles Nash died in 1948. In 1950 Austin of England made the Metropolitan convertible sports car for Nash and in 1951 the Nash-Healey roadster appeared. From 1950, the Rambler made the largest contribution to Nash production. The Nash name survived until 1957 following the amalgamation with Hudson (see Hudson) and the formation of American Motors in 1954.
Nash also made commercial vehicles. After Nash bought the Jeffery company, the four-wheel drive Jeffery Quad truck was continued as the Nash Quad, alongside a standard four-cylinder Nash truck. For the first full year of production Nash built 11,490 trucks and became the world's largest truck manufacturer. Nash truck sales faded during the 1920's. The Nash Quad was discontinued in 1928 and Nash truck production faded out completely by 1930 with a few sedan delivery vehicles built until 1931. After World War II, Nash built a few 3-ton trucks using the six-cylinder Ambassador car engine. Nash also built around 5,000 car breakdown trucks between 1947 and 1955.
Emblems
The following metal emblem was the first Nash radiator emblem and was used on re-badged Jeffery cars from mid-1917 until early 1918 and on all subsequent Nash models to mid-1920:
The following smaller, light blue and white enamel version of this Nash emblem is a mystery. If you can help to identify this Nash emblem, please let me know, in order to update this post. This Nash emblem is rare.
From September 1920, the following blue and white enamel Nash radiator emblems were introduced to distinguish the Nash Series 40 four-cylinder and Series 680 six-cylinder models. These Nash radiator emblems are rare.
There was a change to metal only Nash Four and Nash Six radiator emblems for most models from early 1921 to late 1924, see example below:
Some six-cylinder Nash models carried the following radiator emblem from mid-1923 to late 1924. The same Nash radiator emblem may have been used on some four-cylinder models during this period.
The following, slightly more elaborate variation of this Nash radiator emblem was used on some models in 1924:
The Nash radiator emblem was changed for all models from mid-1924 to a black enamel emblem, see example below:
This emblem was changed to the following, very similar, black enamel Nash radiator emblem in mid-1926:
The following metal Nash emblem was originally painted black and was used from 1925 to 1928 as the spare wheel retaining plate emblem on all disc wheeled cars, except the Nash Light Six:
The Nash Light Six used the following black painted emblem on the spare wheel bracket from mid-1926 to mid-1927:
The following very small metal Nash emblem was used as an instrument panel emblem from 1927-1928:
The 1928 Nash Advanced Six carried the same black enamel radiator emblem shown earlier but used a red enamel version of this emblem as the spare wheel bracket emblem and there was a red enamel version of the very small Nash instrument panel emblem shown above, see examples below. The red enamel spare wheel bracket emblem and small instrument emblem are both rare.


H. A. Lozier had resigned from the Lozier Motor Company in 1912 and decided to build a new car with a name using his own initials, H.A.L. The H. A. Lozier Company was established and a prototype H.A.L.Twelve was shown at the New York Automobile Show in January 1916. The H.A.L. Twelve was powered by a 40 hp V-12 engine and was available as a two-passenger roadster and a .seven-passenger touring car.

Lozier left the company in September 1916 and the company was reorganised as the Hal Motor Car Company. The car was now called the Hal Twelve. Initially, all seemed to be going well with the Hal Twelve and two hundred were produced by October 1916. From 1917, the Hal Twelve was offered in a wide range of body styles but material shortages resulting from the First World War started to cause serious problems and by February 1918 the Hal Motor Car Company was finished.


The H.A. Lozier Company did not settle on a clear logo in its advertising. The most common H.A.L. logo is shown in the following example of a 1916 H.A.L. advertisement:


The H.A.L. logo shown in this advertisement is similat to but not the same as the radiator emblem design shown above. The logo looks more like a hub emblem and, in fact, was used on early H.A.L. hub caps, see example below:


A Hal Twelve advertisement from 1917 explains the meaning of this new Hal Twelve radiator emblem, see close up below: 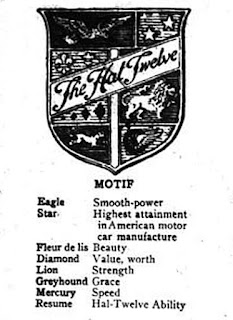